My Dear friend we had a pretty hard battle with Big foots band on the 29th Dec. We killed over 300 of them.

Private Thomas McGuire was a twenty-four-year-old Irish immigrant in Captain Godfrey’s D Troop.  He enlisted in New York City in April 1888 and served three of his five years, being discharged in July 1891 with a characterization of service of excellent.  A native of Leitrim, Ireland, McGuire stood just under five feet, seven inches, with blue eyes, light hair and a fair complexion.  Writing two letters from the Pine Ridge Agency in January 1891, Thomas McGuire related to a friend in Topeka, Kansas, his experience in the battles at Wounded Knee and the Drexel Mission, and about some of the curios he collected from the Wounded Knee battlefield.  He also describes the fear and animosity with which the Lakota viewed the 7th Cavalry three weeks after the tragedy. 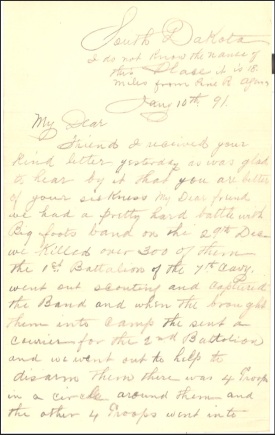 South Dakota
I do not know the name of
this place it is 18
miles from Pine R. agency
January 10th, 91.

My Dear
Friend, I received your kind letter yesterday as was glad to hear by it that you are better of your sickness.  My Dear friend we had a pretty hard battle with Big foots band on the 29th Dec. We killed over 300 of them.  The 1st Battalion of the 7th Cavy, went out scouting and captured the Band and when the[y] brought them into camp the[y] sent a courier for the 2nd Battalion and we went out to help to disarm them.  There was 4 troops in a circle around them and the other 4 troops went into 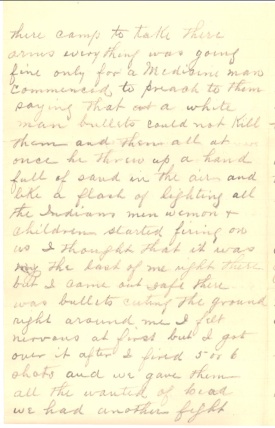 there [sic] camp to take there arms every thing was going fine only for a medicine man commenced to preach to them saying that a white man bullets could not kill them and then all at once he threw up a hand full of sand in the air and like a flash of lighting all the Indians men, women & children started firing on us.  I thought that it was the last of me right there but I came out safe.  There was bullets cuting [sic] the ground right around me.  I felt nervous at first but I got over it after I fired 5 or 6 shots and we gave them all the[y] wanted of lead.  We had another fight

on the 30th, but we had a hard crowd to tackle.  There was about 1200 warriors and about 388 of us and the[y] had us in a pretty hard place to fight them. The Indians will never fight except in ravines or holes of some kind where the soldiers cannot get a shot at them. The[y] are a hard crowd to deal with but I guess the war is about over now.  We heard that the Indians was going into the agency today to give up. We have them surrounded like a horse shoe and the only way that can get out is to go into the agency and if the[y] raise any noise going in the artillery & Infantry is ahead of them there 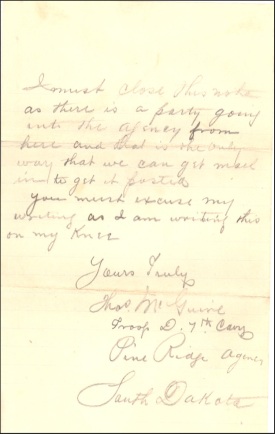 I must close this note as there is a party going into the agency from here and that is the only way that we can get mail in to get it posted.
You must excuse my writing as I am writing this on my knee. 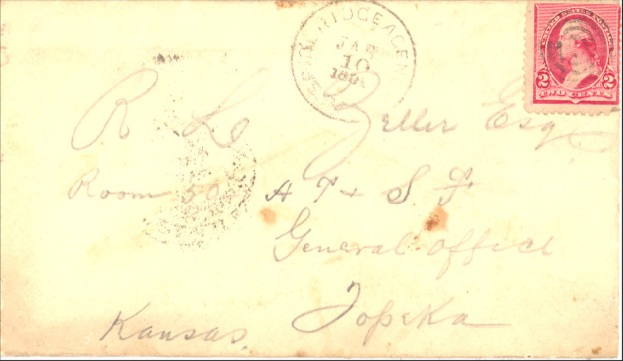 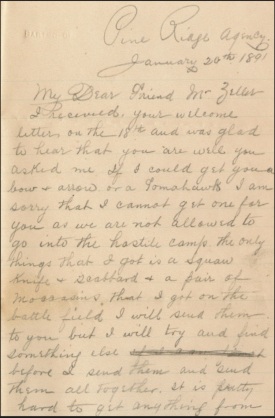 I received your welcome letter on the 18th and was glad to hear that you are well. You asked me if I could get you a bow & arrow or a tomahawk.  I am sorry that I cannot get one for you as we are not allowed to go into the hostile camp.  The only things that I got is a squaw knife & scabbard & a pair of moccasins that I got on the battle field.  I will send them to you but I will try and find something else before I send them and send them all together.  It is pretty hard to get anything from

the Indians as the[y] hate the soldiers. The[y] are turning in there [sic] arms every day here but the[y] want the Seventh Cavalry sent away from here.  The[y] are afraid of us.  The[y] say that the Seventh is on the war path and not them.  We got orders tonight to move camp in the morning, we do not no where we are going to camp but it is believed that we are moving towards Rushville and then to go home from there.  You must excuse me for this writing as the men in this tent is [sic] packing up some of there [sic] stuff.  The[y] say that I am in the way.

This letter was provided courtesy of Ms. Pat Carney.

I am a fifth-generation retired Army officer with twenty-nine years of commissioned service. I have been researching the frontier Army for over eighteen years and am interested in documenting the lives of the soldiers that participated in the battle of Wounded Knee using primarily official reports, diaries, letters, newspaper articles and other primary source documents. My interest in Wounded Knee stems from my kinship to one of the principal participants. I am the great-great-grandson of Samuel M. Whitside, who was a major and battalion commander at the battle. I welcome and encourage comments on posts and pages and am always interested in any new primary sources. If you have copies of letters, diaries, etc, from participants and are willing to share, please contact me. Disclaimer: The views expressed in this blog are strictly my own, and should in no way be construed as official Army or U.S. Government positons.
View all posts by Sam Russell →
This entry was posted in Enlisted, Personal Letters and tagged 1891, 7th Cavalry, 7th Cavalry Regiment (United States), Battle of Wounded Knee, Cavalry, Cavalry Troop, Fort Riley, Pine Ridge, Pine Ridge Agency, Pine Ridge Indian Reservation, Sioux, Wounded Knee, Wounded Knee Creek, Wounded Knee Massacre. Bookmark the permalink.