Private August Kellner was a twenty-nine-year-old Prussian immigrant three months into his second five-year enlistment when he was shot in the head at Wounded Knee.  He was one of two soldiers in Captain Ilsley’s E Troop to be killed that day, while engaged with Lakota that were firing from concealed positions within the ravine in which the survivors of the initial melee had sought refuge.  One of Kellner’s non-commissioned officers, Sergeant Albert W. McMillan, mentioned Kellner’s death in a deposition that McMillan provided for the purpose of documenting two other troopers’ gallant conduct, “Private Kellner Troop “E” 7th Cavalry, the skirmisher on his [Lieutenant Sickel’s] right had been shot by one of the Indians concealed in the above mentioned pocket.  I was the skirmisher on Lieut Sickel’s left about 5yds distant from him.”[1]

Kellner’s troop commander inventoried his personal effects, disposed of them through a council of administration probably by selling them to soldiers in the troop, and sent the monies along with retained pay and pay for clothing not drawn–in all about thirty-eight dollars–to the Adjutant General’s Office in Washington.  The soldier’s mother, Frau Heline Kellner, almost certainly received her son’s monies at her home in Germany where she filed for a pension on 21 March 1891.[2]

August Kellner was born about 1861 in the small village of Klein Schönwalde on the Baltic Sea, which at that time was in the district of Stralsund in the Prussian province of Pomerania, what today is known as Groß-Schönwalde, Ostvorpommern, Mecklenburg-Vorpommern, Germany.  All that is recorded of his family is that his mother’s name was Heline.  By the early 1880s Kellner was working as a fleischer or butcher in the city of Schwerin about 175 kilometers west of his birthplace.  Kellner left his homeland in May 1883 when he made his way to Hamburg, boarded the steamship Gellert, and traveled up the Elbe River into the North Sea and across the Atlantic arriving in New York Harbor on 12 June.[4]

Kellner enlisted in the Army at Fort Snelling, Minnesota, on 8 July 1885, again listing his occupation as a butcher.  The twenty-four-year-old German emigrant stood just under five feet, five inches with grey eyes, light hair, and a fair complexion.  He was assigned to H Troop, 7th Cavalry under the command of Captain Charles C. DeRudio where he served in the Dakota Territory at Forts Yates and Meade.  Kellner completed his five-year enlistment on 7 July 1890 at Fort Sill, Indian Territory.  He traveled to Germany and likely visited his mother before returning to America in August.  On 19 September Kellner made his way to Fort Leavenworth where he enlisted again this time in E Troop, 7th Cavalry.  Little more than two months later he arrived with his troop at the Pine Ridge Agency on that winter’s fateful campaign in which he lost his life.[5]

Following his death at Wounded Knee, August Kellner was buried along with twenty-nine of his comrades in a makeshift cemetery next to the Episcopal church at the Pine Ridge Agency.  He was recorded as being interred in grave number 14.[6] 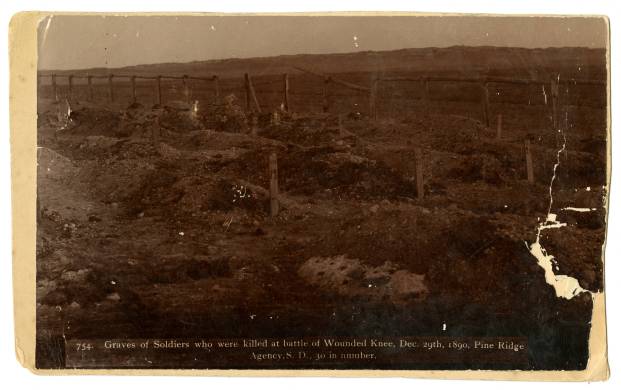 William Richardson Cross’s photograph of the soldiers’ graves at Pine Ridge in January 1891.  The graves were initially marked with numbered boards.  Kellner’s grave number 14 is pictured on the back left.[7]

More than fifteen years later his and his fellow fallen troopers’ remains were exhumed from South Dakota and returned to Fort Riley, Kansas, where they were reburied in the post cemetery.

I am a fifth-generation retired Army officer with twenty-nine years of commissioned service. I have been researching the frontier Army for over eighteen years and am interested in documenting the lives of the soldiers that participated in the battle of Wounded Knee using primarily official reports, diaries, letters, newspaper articles and other primary source documents. My interest in Wounded Knee stems from my kinship to one of the principal participants. I am the great-great-grandson of Samuel M. Whitside, who was a major and battalion commander at the battle. I welcome and encourage comments on posts and pages and am always interested in any new primary sources. If you have copies of letters, diaries, etc, from participants and are willing to share, please contact me. Disclaimer: The views expressed in this blog are strictly my own, and should in no way be construed as official Army or U.S. Government positons.
View all posts by Sam Russell →
This entry was posted in Casualties, Enlisted and tagged 7th Cavalry, 7th Cavalry Regiment (United States), Battle of Wounded Knee, Big Foot, Killed in Action, Medal of Honor, Pine Ridge, Pine Ridge Agency, Pine Ridge Indian Reservation, Sioux, Wounded Knee, Wounded Knee Creek, Wounded Knee Massacre. Bookmark the permalink.