…continued to fight after being severely wounded.

Sergeant James H. Ward was a thirty-six-year-old sergeant in Captain Varnum’s B Troop at Wounded Knee.  He was one of the more experienced soldiers in the regiment with over twelve years in the cavalry, having previously served in the 4th and 5th Cavalry Regiments. During the melee around the Indian council circle that followed the initial volleys, there were a number of instances of hand-to-hand combat between cavalry troopers and Lakota warriors.  Sergeant Ward was involved in one of those individual battles when he was stabbed in the right shoulder with a knife. Despite his wound he continued to fight on that morning.[2]

His bravery that day did not go unnoticed by his comrades and his commander.  Captain Varnum recommended Sergeant Ward for the Medal of Honor on 17 March, and he was awarded the distinction on 16 April 1891 along with Private Marvin Hillock.  Varnum detailed Ward’s actions at the onset of the melee surrounding the council circle:

Sergeant Ward was assisting me in taking arms and ammunition from the Indians and when the Indians drew their rifles and commenced firing he was between the armed and those without guns.  These latter drew their knives and one assaulted Sergeant Ward.  The sergeant was knocked down and stabbed several times in the shoulder but continued to struggle and getting his feet under the body of the Indian threw him off when he (the Indian) was killed by Corporal Capron.  It was a fearful hand to hand struggle.  The sergeant could not use his carbine and was unable to draw his revolver and defend himself from the Indian knife at the same time, and his gallantry on this occasion I think worthy… [3]

Varnum’s recommendation for a Medal of Honor for Sergeant Ward was approved on 16 April 1891.  Later that year Ward was also recognized with honorable mention by the Commanding General of the Army in General Order No. 100.[4] 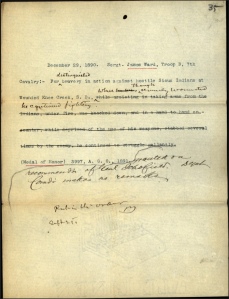 For distinguished bravery in action against hostile Sioux Indians, at Wounded Knee Creek, South Dakota, where, though severely wounded, he continued fighting.[5]

James Henry Ward was born on 22 July 1854 at Quincy, Massachusetts, the second son of Hugh and Catherine (Means) Ward.  Hugh was an immigrant from Donegal, Ireland, possibly the son of Charles and Margaret Ward, and worked as a stone cutter in Norfolk County in the 1850s. Catherine, whom he married about 1851, was also an Irish immigrant and the daughter of Roger and Catherine Means.  Hugh Ward became a naturalized citizen of the United States in August 1856.  During the Civil War, he enlisted in Company H, Massachusetts 2nd Infantry Regiment on 2 September 1862 and served for thirteen months before returning to Boston.  Hugh and Catherine had at least seven children.  The eldest was Charles Hugh, born in 1852 and died in 1914; next was James Henry, the subject of this post; John was born in 1856; next came William, born in 1847 and died in 1905; a daughter, Mrs. Catherine Crowley, was born 1859 and died in 1914; Joseph was born in 1864; and the youngest, Margaret, was born in 1868.  Hugh Ward died either in Quincy in 1886 or in Boston on 11 September 1888. His wife, Catherine had preceded him in death on 7 August 1871 at Boston.[6]

Several weeks after, and perhaps inspired by, the battle on the Little Bighorn twenty-two-year-old James Ward left his job as a bricklayer at Quincy, traveled to Boston, and enlisted in the cavalry on 3 August 1876.  Standing five feet six and half inches tall, he had blue eyes, brown hair, and a fair complexion.  Private Ward was assigned to Company K, 5th Cavalry, ultimately serving under Captain Albert E. Woodson at Fort Laramie, Wyoming Territory, where he completed his five-year enlistment in August 1881 with an ‘excellent’ characterization of service.  Ward returned to the east and resumed his job as a bricklayer, but sought out the Army again two years later.  He enlisted at New York City on 16 July 1883 and spent the next five years with B Troop, 7th Cavalry, then commanded by Captain Thomas M. McDougall.  Ward finished his second five-year enlistment in July 1888 with the rank of sergeant and characterized as excellent.  He again returned to Massachusetts, but two months later made his way to another recruiter in Boston where he signed up for another five years.  This time he was assigned to M Troop, 4th Cavalry, but was eventually transferred back to B Troop, 7th Cavalry, where he found himself under Captain Varnum’s command during the Pine Ridge Campaign.[7]

Perhaps because of the extent of his knife wound at the battle, Sergeant Ward was discharged from the service less than a year later, and after only three years of his five-year enlistment.  By the time he was given honorable mention in General Orders, the medal of honor recipient was a civilian in Boston where he eventually found employment as a steamfitter, perhaps no longer able to handle the physical exertion of a bricklayer because of his war wound.[8]

Moving on with his life after the army, James Ward married Catherine E. Harrington on 18 April 1894 at Boston.  Ten years his junior, she was was an Irish immigrant and the daughter of Patrick and Ellen (Haylon) Harrington. Four years later she gave birth to their only child, James Henry, Junior born 10 December 1898.[9]

But Ward’s new life in Boston with his wife and child did not last long.  By 1899 the former cavalry trooper was admitted to the Boston Insane Hospital in Roxbury, apparently suffering from paralysis. He died at the age of forty-six on 11 March 1901 from exhaustion of general paralysis after suffering for two years as an inmate at the hospital.[11]

He was buried at the New Cavalry Cemetery at Mattapan, Massachusetts.  His wife, Catherine, survived him by fifty-two years working as a picker in a carpet factory and apparently never remarried.  Their only son, James, married Mary Anna Lieber, whose union produced seven grandchildren for the cavalry trooper’s widow; in 1940, the ten of them were living together on Bickford Avenue in Boston.  Following Catherine Ward’s death in 1953, she was laid to rest next to her long departed husband.[12] 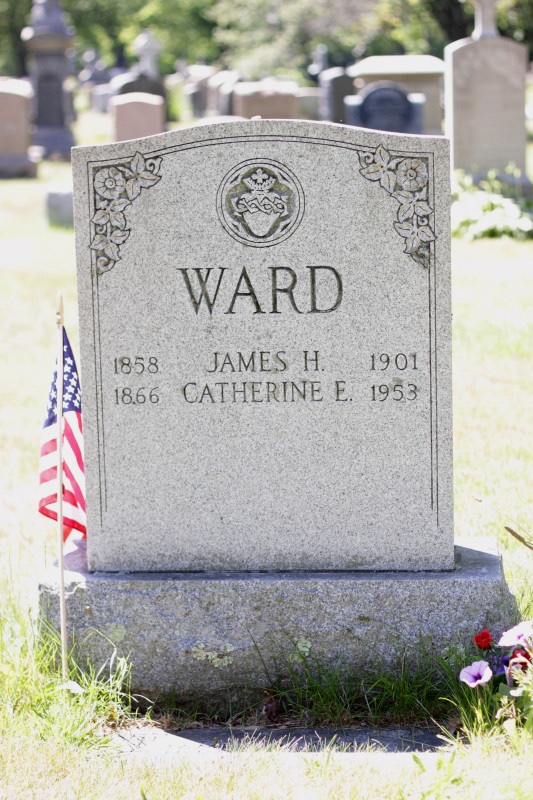 I am a fifth-generation retired Army officer with twenty-nine years of commissioned service. I have been researching the frontier Army for over eighteen years and am interested in documenting the lives of the soldiers that participated in the battle of Wounded Knee using primarily official reports, diaries, letters, newspaper articles and other primary source documents. My interest in Wounded Knee stems from my kinship to one of the principal participants. I am the great-great-grandson of Samuel M. Whitside, who was a major and battalion commander at the battle. I welcome and encourage comments on posts and pages and am always interested in any new primary sources. If you have copies of letters, diaries, etc, from participants and are willing to share, please contact me. Disclaimer: The views expressed in this blog are strictly my own, and should in no way be construed as official Army or U.S. Government positons.
View all posts by Sam Russell →
This entry was posted in Award Recipients, Enlisted and tagged 7th Cavalry, 7th Cavalry Regiment (United States), Big Foot, Cavalry, Fort Riley, Lakota, Medal of Honor, Pine Ridge, Pine Ridge Agency, Pine Ridge Indian Reservation, Sioux, Wounded Knee, Wounded Knee Creek, Wounded Knee Massacre. Bookmark the permalink.