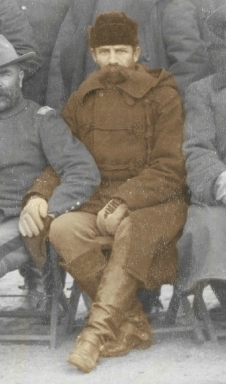 In 1896, Major Edward S. Godfrey wrote an article for the Journal of Military Service Institution in which he described fire discipline and its connection to the training and control of soldiers in combat. He offers several vignettes from his experiences in the 7th Cavalry, one of which is his firing line just south of the ravine at Wounded Knee.

Godfrey had little more than two weeks to train his troop when he arrived at the Pine Ridge Agency from detached service on December 6th. Several of his soldiers were new recruits. At Wounded Knee Godfrey’s D Troop suffered one soldier killed in action and one wounded, along with the loss of four horses. Snippets from his article are often quoted as evidence of indiscriminate and merciless killing of non-combatants at Wounded Knee. Following is the majority of his article that provides the full context to which he was addressing: that young soldiers with no combat experience, through regimented training, can be molded into a disciplined firing line capable of laying down effective small arms fire even without the ability to aim. I have removed from the article only those vignettes that do not address Wounded Knee. 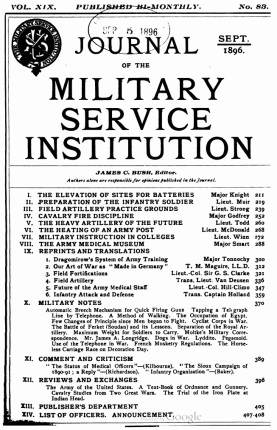 “Fire discipline is the unhesitating habit, developed by instruction and training, of commencing, relaxing or ceasing the fire, and concentrating it on the designated objective in obedience to orders. No firing should ever be permitted without orders; and it should cease as soon as the command Cease Firing is given.”

The Drill Regulations state the rules concisely; Wagner gives the reasons therefore with clearness, and Bachelor elaborates all the details. The control of fire in battle, or fire discipline is intimately connected with the control of men under fire, and it is to this phase that I will give most attention.

It is difficult, if not impossible, for any one who has not commanded men under fire to appreciate the difficulties and dangers incident thereto (I mean from the moral point of view). It is a mistake to suppose that because a man has been in the service for years he maybe depended upon absolutely to do one’s bidding when he goes into action for the first time. It will then be found that drill is important, discipline more important, and personal equation is most important. The combination of these makes up the morale, the soul.

Some men seem to be fearless and do whatever is told them, and do it intelligently; some are sullen and whatever they do, they act as if under protest; another class are stimulated to the utmost activity and want to be doing something, and if they are held down they will talk; it seems that they must have a vent; they are easily excited and are difficult to handle in a retreat. Another class appear to be overcome, lose all self-possession, are wild-eyed and when an order is given look at you in an appealing sort of way. They want some place to hide, they have to be watched and driven, but such men often recover themselves and do excellent shooting.

I doubt if there are many men who at some time while under fire would not agree with the volunteer colonel, of whom it is related that during a battle when he saw a rabbit scudding to the rear, exclaimed: “Go it cotton tail! if it wasn’t for reputation I’d run too!”

Experience has shown that in hastily raised volunteers, officers, non-commissioned officers and privates are about alike in their ignorance and knowledge of drill and military subjects in general. They are nearly all on the ground floor; nature and culture have qualified some to better fill certain positions than others; but in the beginning, men will be elected and appointed to positions through influences not necessary to discuss. In the beginning each man will strive to learn the duties of his particular position; he will next strive to learn the duties of those above and below him; they may and probably will go hand in hand, but his own duties will be paramount.

Experience has also shown it almost an axiom, that to control raw inexperienced men, authority must be subdivided to a greater extent than with disciplined, well-seasoned soldiers. The greener the troops the greater the necessity for personal supervision or control by their leaders; the fewer the men in that subdivision (within certain limits of course), the better that control; in other words, the men must be immediately under the eye and voice of some leader. The squad gives the most convenient subdivision for this personal supervision and therefore becomes the unit of fire discipline…. 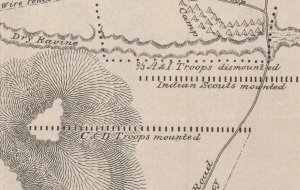 (Click to enlarge) Inset of Lieut. S. A. Cloman’s map of Wounded Knee depicting the scene of the fight with Big Foot’s Band, December 29, 1890.

Before the battle of Wounded Knee I had a letter from a distinguished officer of the army in which he said: “I hope even yet to see the campaign settled without a fight. If there is a fight however, there can be no question as to the result. With our arms and marksmanship it will be interesting to note the difference between former battles and those now fought.” When the fight came off the result was a surprise, a great surprise. All the firing that I saw was within two hundred yards, kneeling and standing, from the shoulder. As soon as the Indians crossed the ravine, perhaps two hundred yards distant, and attempted to escape on the Agency road, I gave the command, “Commence firing!” I know the men did not aim deliberately and they were greatly excited. I don’t believe they saw their sights. They fired rapidly but it seemed to me only a few seconds till there was not a living thing before us; warriors, squaws, children, ponies and dogs—for they were all mixed together—went down before that unaimed fire, and I don’t think anything got nearer than a hundred yards. I believe over thirty bodies were found on our front. With perhaps two exceptions, I don’t believe the men had been under fire before. They had fired at target and drilled at aiming until it seemed to be a second nature to shoot where they looked!

Having a strong firing line on the defensive, of equally well trained troops, I believe no attacking body of troops, however strong or determined, could reach the line. The moral of that story is that target practice is an immense success, and as a factor in fire discipline will prove of very great value….

I am a fifth-generation retired Army officer with twenty-nine years of commissioned service. I have been researching the frontier Army for over eighteen years and am interested in documenting the lives of the soldiers that participated in the battle of Wounded Knee using primarily official reports, diaries, letters, newspaper articles and other primary source documents. My interest in Wounded Knee stems from my kinship to one of the principal participants. I am the great-great-grandson of Samuel M. Whitside, who was a major and battalion commander at the battle. I welcome and encourage comments on posts and pages and am always interested in any new primary sources. If you have copies of letters, diaries, etc, from participants and are willing to share, please contact me. Disclaimer: The views expressed in this blog are strictly my own, and should in no way be construed as official Army or U.S. Government positons.
View all posts by Sam Russell →
This entry was posted in Professional Journal and tagged 7th Cavalry, 7th Cavalry Regiment (United States), Cavalry, cavalry tactics, Edward Godfrey, fire discipline, Godfrey, Lakota, Miniconjou, Oglala Lakota, Pine Ridge Indian Reservation, Sioux, Wounded Knee, Wounded Knee Creek, Wounded Knee Massacre. Bookmark the permalink.