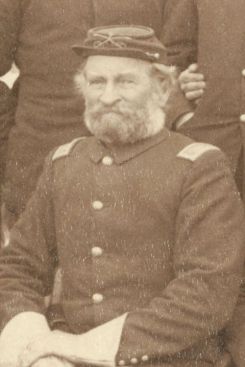 Following the battles of Wounded Knee Creek on 29 December and White Clay Creek on 30 December, and the military funeral of thirty 7th Cavalry troopers on 31 December, Major Samuel M. Whitside finally had an opportunity to write his official report of the capture of Chief Big Foot and his band of Miniconjou Lakota.

Sir: I have the honor to submit the following report:

In compliance with instructions contained in letter from Commanding General Dept. of the Platte, dated Dec. 26, 1890, and endorsement thereon, by Colonel, 7th Cavalry, I left camp at Pine Ridge Agency, S. D., at 1:20 P.M., Dec. 26, ’90, with my battalion, consisting of Troops A, I, K, and B, 7th Cavy., and two Hotchkiss guns, in command of Lieut. H. L. Hawthorne, 2nd Arty., and proceeded to a point on Wounded Knee Creek known as the Post Office crossing, reaching there about 5:00 P.M., same date.  As I approached the creek, my scouts reported they had seen four (4) Indians who said they were “Sitting Bull people.”  I sent Troop “A”, 7th Cavy. under Capt. Moylan, 7th Cavy. forward at a gallop to try and capture them, but darkness prevented.  On Capt. Moylan’s return, I went into camp on the creek near the crossing.

The following morning, Dec. 27, ’90, I sent Lieut. E. A. Garlington, 7th Cavy., with twenty-one (21) men to scout down Wounded Knee Creek and ascertain if possible if any Indians had crossed during the night, and also to try and communicate with Major Henry, 9th Cavy.

Lieut. J. C. Gresham, 7th Cavy., with twenty-one (21) men, was sent up Wounded Knee Creek to the State line, with instructions to thoroughly scout that country and ascertain if any Indians had crossed the creek to my south during the night.

Lieut. Gresham returned about 4 P.M., and reported he had seen no signs of Indians.

Lieut. Garlington returned about 9 P.M., and reported he had been down Wounded Knee about 25 miles and could find no signs of either Indians or Henry’s command.

My Indian scouts were sent well out to the east, towards Porcupine Creek and returned about dark and reported they had seen no signs of Indians.

On the morning on the 28th I sent a half-breed scout known as “Little Bat,” who reported to me the evening before, (with Lieut. Preston, 9th Cav.) and 3 Indian scouts, with instructions to scout the country about the Porcupine and try and locate “Big Foot” who I felt confident was in that direction.

At 11 o’c. A. M., “Little Bat” came into camp and reported “Big Foot” on the Porcupine coming in my direction.  I immediately saddled up and took the trot in the direction of the Porcupine, sending “Little Bat” and 3 scouts ahead.  Within two miles of the Porcupine the Indians were seen on the hill halted.  I formed my command in double column of fours, dismounted and formed line to the front, placing the Hotchkiss guns in the centre, and then rode forward with Lieut. Nicholson, 7th Cavy.,  met the Indians. “Big Foot” who was riding in a wagon, being sick, then came to the front.  I demanded the surrender of his band.  In the meantime, 120 Indians, well armed, two-thirds mounted, the remainder dismounted, advanced in line.  Some Indians tried to ride around my flanks.  I ordered them to return to the band, which order they obeyed.  I informed “Big Foot” that they were my prisoners and I would take them to Wounded Knee and go into camp for the night.

After this I wrote a dispatch to the Dept. Commander announcing the capture, requesting that the 2nd Battalion, 7th Cavy., be sent as re-enforcement to my command to arrive before daylight the following morning to assist in the disarming of the Indians, as I did not consider it safe to make the attempt to disarm them with my command; this dispatch I sent in by Lieuts. Nicholson, 7th Cavy., and Preston, 9th Cavy.

I then took up my march with 2 troops in advance, followed by the Indians, two troops bringing up the rear, and arrived at the Wounded Knee Crossing at 2:30 P.M., and went into camp, detailing 2 troops, A and I, to guard the Indians during the night, which was done by placing a chain of sentinels around their camp and the 2 Hotchkiss guns under Lieut. Hawthorne on the side of the hill overlooking the Indian village.

About 8:30 P.M. the same date, Colonel James W. Forsythe [sic], 7th Cavy., with the 2d Battalion of the regiment arrived and assumed command.

Source:  National Archives Microfilm Publications, “Reports and Correspondence Related to the Army Investigations of the Battle at Wounded Knee and to the Sioux Campaign of 1890–1891,” (Washington: The National Archives and Records Service, General Services Administration, 1975), 822–823.

I am a fifth-generation retired Army officer with twenty-nine years of commissioned service. I have been researching the frontier Army for over eighteen years and am interested in documenting the lives of the soldiers that participated in the battle of Wounded Knee using primarily official reports, diaries, letters, newspaper articles and other primary source documents. My interest in Wounded Knee stems from my kinship to one of the principal participants. I am the great-great-grandson of Samuel M. Whitside, who was a major and battalion commander at the battle. I welcome and encourage comments on posts and pages and am always interested in any new primary sources. If you have copies of letters, diaries, etc, from participants and are willing to share, please contact me. Disclaimer: The views expressed in this blog are strictly my own, and should in no way be construed as official Army or U.S. Government positons.
View all posts by Sam Russell →
This entry was posted in Official Reports and tagged 7th Cavalry Regiment (United States), Big Foot, Lakota, Miniconjou, Samuel Whitside, Sioux, whitside, Wounded Knee Creek. Bookmark the permalink.